I was at the library today doing some study for my trials coming up tomorrow (eep, I shouldn’t be writing this) and they commented on the mess that I made.

Well, this is the mess that I make at home.

So after reading up about the Coalition’s supposed “alternative” broadband “policy”, I feel rather angry and annoyed that they think they know what is best for those in regional areas and the economy. I hope no one is going to be voting for the coalition.

I just felt that I should address some points, just in case people were thinking that the Coalition’s scheme was sounding good. Don’t forget that they are spending far less money and therefore the service will be of a far reduced quality.

Sure it’s cheaper but it’s only delivering a minimum of 12Mbps to 97% of households, some city folk getting 100Mbps HFC, ADSL2+ and the rest sitting on below average satellite. With 90% coverage by 2016. Considering that the NBN will be nearly build by then covering 93% of the population with 100Mbps fibre (yes please!) and the rest with 12Mbps wireless and satellite. They haven’t really specified who will get what. What happens in the future when we need faster speeds that copper simply just can’t deliver? Copper at it’s current technology tops out at 40Mbps and that decreases the further you move away from the exchange. The NBN starts at 100Mbps and it’s easy to go up from there and speeds won’t degrade with distance.

The Coalition also haven’t addressed the problem of equity. I’m assuming here that the majority of city users will be able to access 100Mbps HFC and users here in Mudgee will be stuck on 24Mbps max. When online services standardise, it will be at the faster rate of 100Mbps leaving those on the lower speeds behind. City people don’t understand rural people. We need a widespread distribution of a high speed fibre network that can be continually upgrade in the future.

END_OF_DOCUMENT_TOKEN_TO_BE_REPLACED

So two factors contributed to this. I was bored in software and I decided to look up the works of David Thorne, an Australian satirist famous for the Kate’s Party incident and for trying to pay a bill with a drawing of a spider. After many links, I was led to this website: http://www.boredatwork.com.

I found this reason for the block highly hilarious 🙂 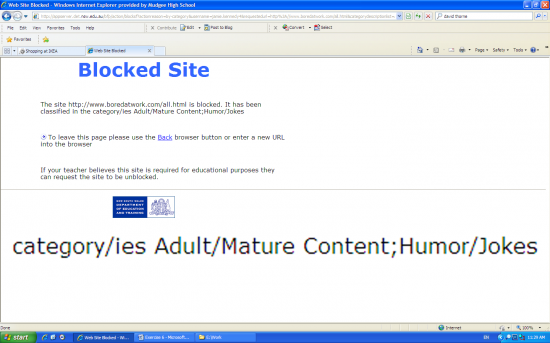 But I highly recommend you check out his site – 27bslash6, interestingly, his site was NOT blocked under the DET filter.

So I just had a “microSD moment” which reminded me of this xkcd. I still find it hard to comprehend how they manage to fit so much into so little.

I just ordered some cheap microSD card readers off DealExtreme and they arrived in the mail today. It freaked me out how SMALL these damn things are, not to mention how damn small microSD cards are. I have an 8GB one (in my phone) that cost me $20 last year, that 4GB USB in the photo cost me $140 back in 2006. So for 1/7th of the cost, I managed to get 2x the storage at in a far more smaller package…. why wouldn’t you be freaked out?

The second photo shows just how damn small the reader is when plugged into the USB port, compared to the Ethernet and MiniDisplay Port plugs and a normal SD card.

How things have changed, one day, I might line up my floppy discs and other assorted storage devices that I have collected over the years and take a photo, until then, I shall remain amazed by these tiny little chips of semi-conductive plastic.